What is breast implant illness?

In this research article, Dr Jordan Kaplan and Dr Rod Rohrich explain that “recently, the term ‘breast implant illness’ (BII) has become popularised in social media to describe a constellation of symptoms which have been attributed to a patient’s breast implants. These symptoms include fatigue, chest pain, hair loss, headaches, chills, photosensitivity, rash, and chronic pain amongst others.” It is also sometimes referred to as autoimmune/inflammatory syndrome induced by adjuvants (ASIA). BII can occur with any type of breast implant, including silicone gel filled, saline filled, smooth surface, textured surface, round or teardrop shaped.

The symptoms can appear any time after implant surgery; some people develop symptoms immediately, while some develop them years later. A lot of the symptoms of BII are associated with autoimmune and connective tissue disorders, such as lupus, rheumatoid arthritis, and scleroderma. Some people who have BII also get diagnosed with a specific autoimmune or connective tissue disorder, but many do not. Currently, there are no commonly used diagnostic tests or diagnostic criteria specifically for BII. 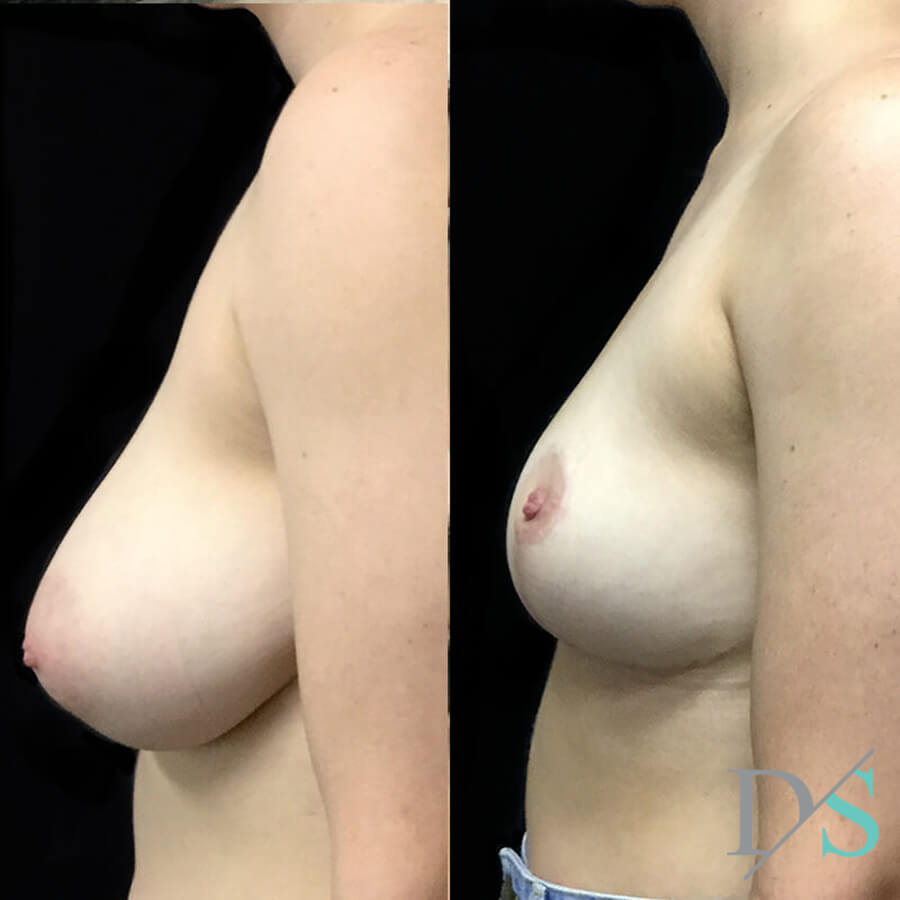 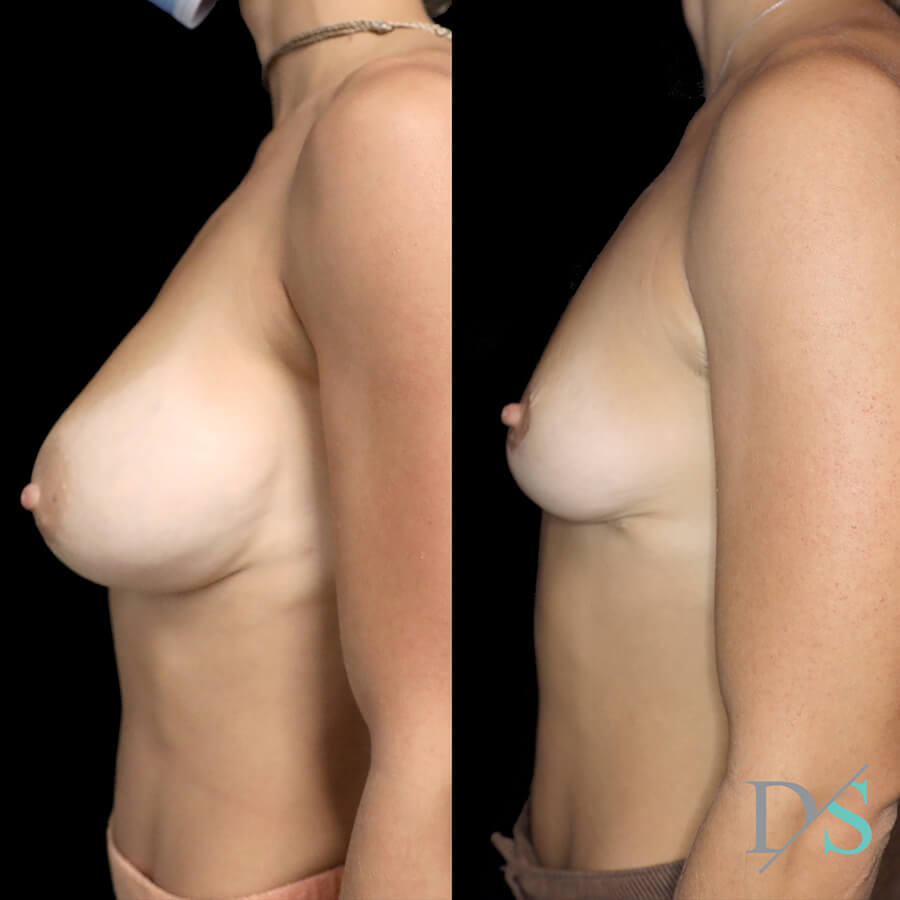 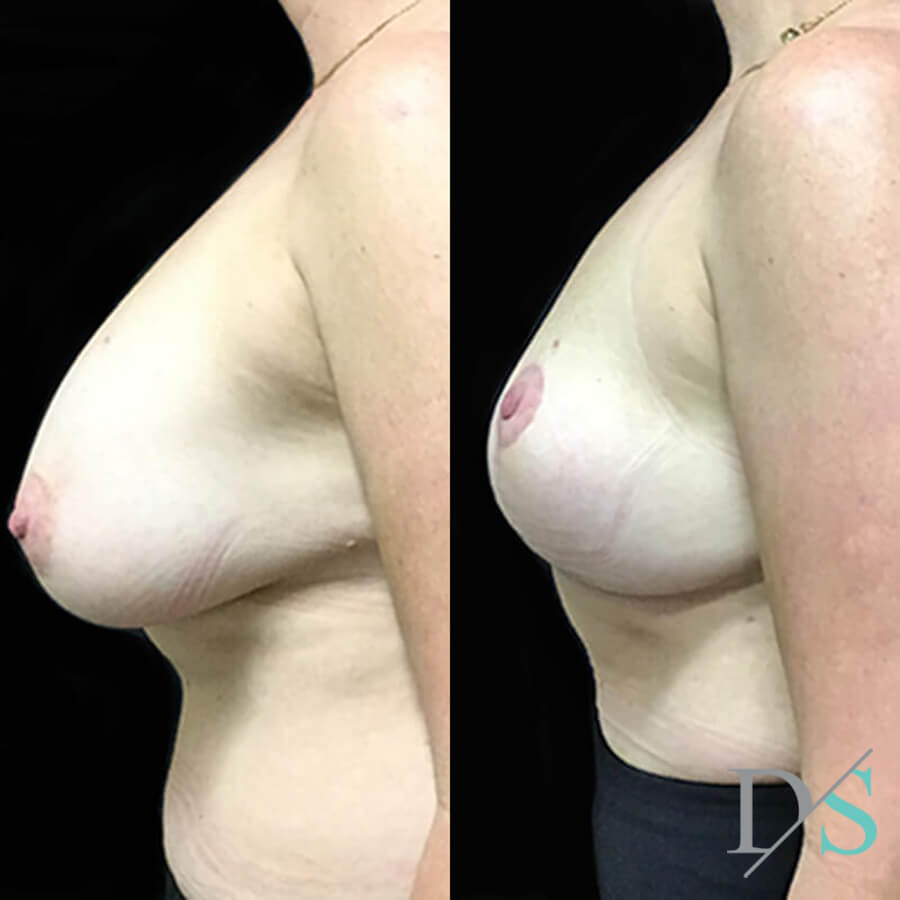 Above: before and after implant removal with breast lift or reduction with Dr Sharp

How is BII treated?

In many, but not all cases, surgery to remove the breast implants improves or completely resolves the BII symptoms. The only way to truly check is by removing your breast implants and assessing how you feel once they are removed. While majority of BII patients report they feel better once the implants are removed, there is always a chance that your symptoms may continue because your symptoms were caused by something other than your implants.

There isn’t much research on outcomes after implant removal surgery for BII. According to the American Society for Aesthetic Plastic Surgery, a small study of 100 patients with self-reported BII in one surgeon’s practice showed that 89% of patients who had implant removal and capsulectomy experienced improvement in some of their symptoms within 3 months of surgery.

Some doctors say that it can be particularly helpful after implant removal surgery for BII to eat a healthy diet, get regular exercise, and decrease stress. These steps may promote healing and decrease the inflammation in the body that can be associated with BII.

Is it safe to have new implants placed after I’ve had BII?

Current evidence supports the safety of silicone breast implants; they are a very safe option for the vast majority of patients and Dr Sharp supports their ongoing, well-informed use in both reconstructive and cosmetic breast surgery.

While more research is needed to help surgeons understand the causes, symptoms and treatment of BII, Dr Sharp believes that a very small percentage of the millions of people who currently have implants experience a cluster of symptoms known as ‘BII’. He accepts that when implants are removed, these patients usually feel an improvement in their symptoms. As such, he also supports patients who report symptoms and wish to remove their implants, and he is happy to facilitate this through explant surgery.

Is it possible to predict whether I will have BII after implants?

Some early research has suggested that people with pre existing immunological disorders or allergies – or a family history of these – are more likely to experience elevated reactivity to the placement of a prosthesis in their body, which could be part of the response that we know as ‘BII’.

Is BII something I should be worried about?

We do not dismiss concerns about BII, as patients should consider all possibilities when having surgery, whether or not the scientific and surgical communities fully understand them yet or not. If you were to rank the spectrum of possible complications from ‘most common’ to ‘least common’, there are other potential complications such as rupture or capsular contracture that would be more common, and sometimes more complex to treat, than BII – and that’s one of the reasons why these risks are emphasised more than others.

Understanding these risks profiles helps us see them in perspective to other complications. It is very important to weigh up whether or not the benefits of having an augmentation against the possible anxiety caused by potential risks such as BII. For some people, the anxiety experienced by worrying about such complications – whether it happens to them or not – is not worth the joy of having implants in the first place. We have found that this anxiety is often exacerbated by unfounded claims and disinformation online. Drs Kaplan and Rohrich’s study pointed out that “today various social media platforms as well as physicians can be found disseminating false, unproven, and largely anecdotal information regarding the safety of these devices and even support unwarranted and possibly morbid procedures such as en bloc capsulectomy.”

Patients sometimes report reading on forums that an en bloc resection is vital, if they think that they have BII. ‘En bloc’ has become a popular term, and is often incorrectly interpreted. Currently there is not enough scientific evidence to suggest that a radical en bloc resection is necessary. En bloc capsulectomy often involves removing the capsule off of the chest wall and ribs, which may require a much larger incision – and up to triple the length of time under general anaesthetic, as the procedure is performed in a slow and meticulous manner. Not all capsules are the same. Frequently, if the capsule is thin, the space will collapse after the implant is removed, making complete removal more dangerous to attempt versus just removing the majority of the capsule and leaving the adherent portion in place.

When deciding whether or not to perform one, a surgeon must also weigh up the additional complications it can cause. Many surgeons prefer to perform an anterior capsulectomy with the implant and leave the base of the capsule intact to avoid potential complications of posterior capsulectomy (eg pneumothorax, chest wall injury) especially if the patient has very thin chest wall musculature. In most cases, the removal of implants with a standard capsulectomy is sufficient to see an improvement in BII symptoms.

If there is a capsular contracture present, most surgeons will remove a portion or all of the capsule. Simple implant removal and capsulectomy (partial or complete) is also usually adequate in most BII cases. If there the capsule is abnormal, it is sent to be evaluated by a pathologist.

This is why Dr Sharp emphasises to all explant patients that en bloc capsulectomy may not be possible due to a number of factors that often only become apparent during surgery. While forums are undoubtedly a valuable resource, always discuss your options with a specialist plastic surgeon to ensure your surgical plan meets your own specific medical needs.

BII is not currently recognised as an official medical diagnosis and further research is required to understand this rare response to implants better. Based on current available research it is difficult to predict who will and won’t be sensitive to breast implants, or experience symptoms of BII.

We advise patients that if they have reason to be concerned about being specifically susceptible to BII, there is not enough evidence for any surgeon to assure them that this won’t occur for them – and hence they should weigh up this risk, and how they might feel if it were to occur, when making the decision to proceed with, or abstain from, implant surgery.